Trying to control the Water Works!

Don’t get me wrong! I don’t mean those nightly waterworks, when you don’t know whether to stand or sit in the Loo forever or just return to bed! No, not those Waterworks, I mean from the eyes! Tears, crying.

I’ve already written about some of my ‘Great Moments in the Theatre’ that I remember. Well, here are a few tearful ones.

I simply mean the flood of tears that I have been subjected to ever since childhood. When I’ve read a really sad book, seen an even sadder Play or Film, or heard a piece of Classical Music or even listened to some of the Dramas that Mrs. Dale went through! I’ve been reduced to tears. I become so involved in the plot, that I’m either reading through tears, or watching whatever through a haze!

When I read that Carousel was going to open at the Coliseum in July 2017. The thought of the plot upsets me just thinking and writing about it, and what with that and also the music!!!  Well!!! There was no way that I could possibly see the production without the flood gates opening! It is the saddest and most brilliant Musical I’ve ever seen. I won’t go and see it again because I would embarrass myself crying in anticipation of crying!.

I only have the original programme. All the publicity, photos, etc., come from the current 2017 production.

In 1950 my friend George Harris invited me to see at the Theatre Royal, Drury Lane the new production of “Carousel” that had just opened from America. He wasn’t flush with money, so all he could really afford were 2 Gallery Seats. But I was very happy to be asked. If you have ever sat in the Gallery at the Theatre Royal, it’s like a kilo-metre from the stage, so all the performers look minute? The Musical was adapted from the French Play “Lilliom” by Ferenc Molnar. Rogers and Hammerstein had the rights for a Musical of the play, and I already knew the plot ‘vaguely’, as it was part of the Repertoire of the Comedie Francaise which I saw, when they performed for a season at the Saville Theatre, Shaftesbury Avenue in French. But I wasn’t completely ‘au fait’ with what was happening and got a little confused.

But the Musical that was something else! It was Magical! Allthis from up in the Gallery! You have already gathered that I am a total Theatre and Film enthusiast, or Nut is an easier word! Usually, whatever I see I usually become completely absorbed in. Unless it is the pits, then I leave. The Music alone for Carousel is wonderful, and the plot. Oh! The plot! The plot revolves around Billy Biglow a Carousel Barker. Well!!!  In Act 1, I was fine, after all I was sitting miles away from the Stage, up in the Gallery, and it was only a Musical with wonderful music and with little actors, and then Billy Biglow the leading man dies.

Alfie Boe and Nicholas Lyndhurst as the “Starkeeper”

Come Act 2. Fifteen years after his death Billy Biglow goes to Heaven after years in purgatory and there he meets the Star-keeper, and is told that before he could enter Heaven he had to redeem himself on earth and is granted permission to return to earth for a day to make amends to his widow and their daughter, and he steals a Star to take with him.  ‘Get ready for it!’ 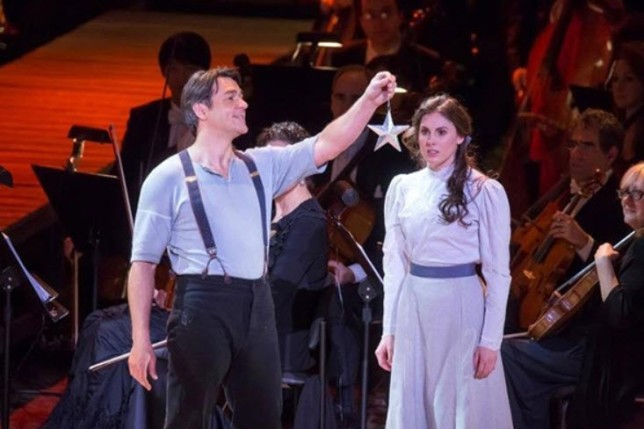 (Of course, the whole thing is pure fantasy. But it didn’t matter) He goes to earth in human form and meets his daughter who is about 15yrs. old. But he frightens her when he offers her the Star, and she gets scared and refuses it, and losing his temper he slaps her and she runs away. Knowing he has lost his chance, he leaves the Star on the bench in the yard of their house. All this time the Starkeeper is with him, and by this time Billy has become invisible. 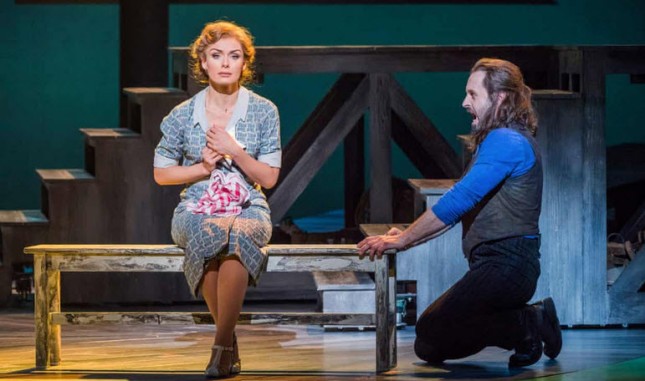 Julie his widow enters when she hears her daughter cry out. She comforts her daughter and then she sees the Star on the bench, and she knows that Billy has been there. Well! The sight of her sitting there holding the Star and he at her side invisible, singing of his love for her. It was just too much. I cried buckets! And remember I was up in the Gallery. So there is no way that I could possibly sit through “Carousel” dry eyed. The thought of the Bench, Star, Julie, the Singing, and the Music, and I’m away!

N.B. Couldn’t find any photos or publicity from the original production. So I used the current ones.

Now a Film that left me sobbing my heart out, and the bloody lights went up in the Theatre! And we all stood there whilst they played “God Save he Queen”. shaming me terribly, with my horrible red swollen eyes! 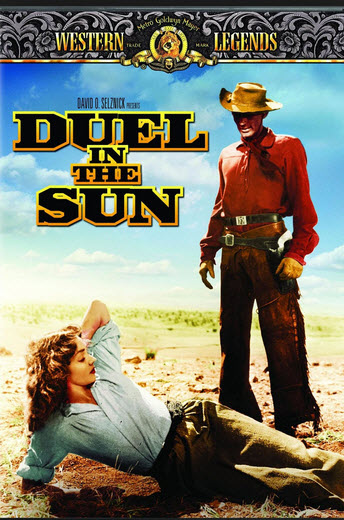 Beautiful half-breed Pearl Chavez becomes the ward of her dead father’s first love and  goes to live with distant relatives a Senator and his two sons in Texas. Almost at once, already existing family tensions are exacerbated by her presence and the way she is physically drawn to Lewt the elder son. One night, Lewt forces Pearl and she submits to him and she becomes ashamed and angry with Lewt. However the Senator expels his sons from the ranch and when Jesse is going to say goodbye to Pearl, he finds Lewt in her room. Jesse leaves Pearl behind and Lewt promises to marry her; but when she learns his real intention, she believes she is a trash and becomes her lover. Lewt and Jesse have a duel to win Pearl. Lewt wins, as usual, but Jesse survives. Lewt sends word to Pearl for her to see him before he slips across into Mexico. Pearl realizes that Lewt will one day try again to kill Jesse. She meets him in the mountains and shoots Lewt and is then shot by Lewt. 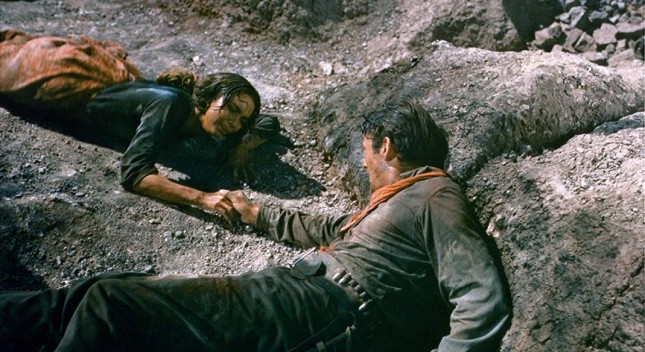 Lewt, as he’s dying, professes his love for Pearl. Pearl, also shot, struggles to get to the dying Lewt and they die in each others arms. 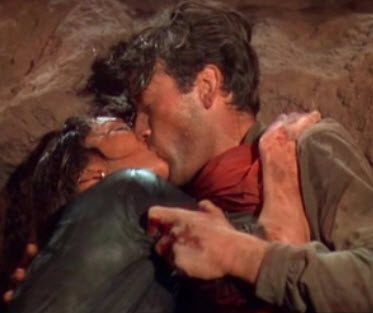 WELL!!!  The two of them dragging themselves to one another, was just too much for me. I cried buckets! Then the bloody lights came up, of all times “God Save the Queen”! I left the Haymarket Cinema with a handkerchief over my face. Until I became presentable.  This is just a rough synopsis of the plot, which was far more complicated, but is was just the two of them dragging themselves to die together in each-others arms, was too much for me!!!

Now for another one!

In 1960, Ray, and Mark Canter the Costume Designer and I, went to America for the first time. We did the full tour. New York, Chicago, Los Angeles, San Francisco, New Orleans and then back to New York. 2 months total in all.  In New York we saw so many shows and as we were in the Striptease Business, we saw every Burlesque Show going, this happened wherever we went much to Marks chagrin! As he remarked, ’They were all the same and very tacky’ and he was right! Still Ray and I thought we had to see them just in case we missed something. But they were all very tired and tacky!

In New York apart from many shows, we saw this ‘piece de resistance’ at the Playhouse Theatre on Broadway  “The Miracle Worker” starring Anne Bankroft and Patty Duke. 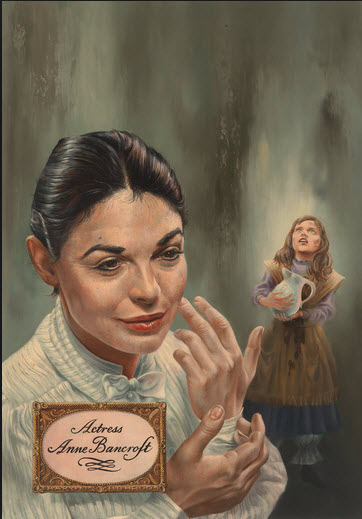 A Beautiful Painting that I had to include of  Anne Bankroft.

The  play, “The Miracle Worker”, is set in the 1880’s. In Tsucumbia, Alabama. It follows the Keller family and their struggles with their daughter Helen who is, blind and deaf after suffering a terrible fever as a baby, young Helen Keller (Patty Duke) has spent years unable to communicate, leaving her frustrated and occasionally violent.  As a last chance before she is institutionalized, her parents) contact a school for the blind, which sends half-blind Annie Sullivan (Anne Bancroft) to teach Helen. 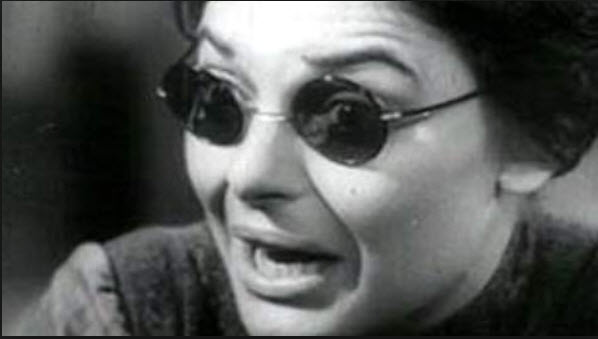 Anne Bankroft as the half blind Annie Sullivan.

Pitied and badly spoiled by her parents, Helen is taught no discipline and, by the age of six, grows into a wild, angry, tantrum-throwing child in control of the household. 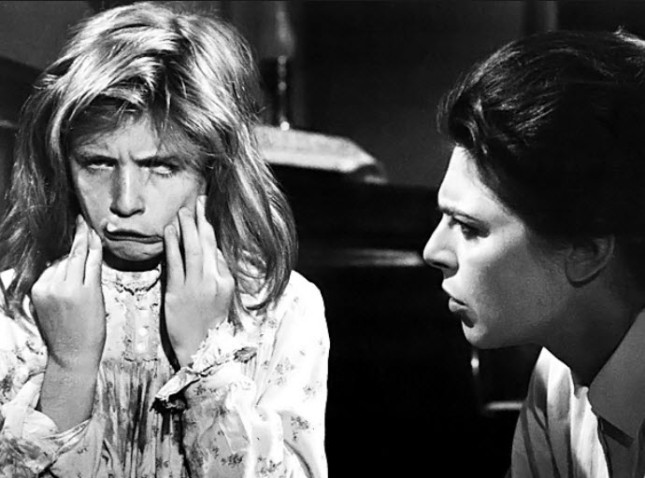 Helen is initially resistant, but Annie gradually forms a bond with her and shows Helen ways of reaching others. After several fierce battles with Helen, Annie convinces the Kellers that she needs two weeks alone with Helen in order to achieve any progress in the girl’s education. 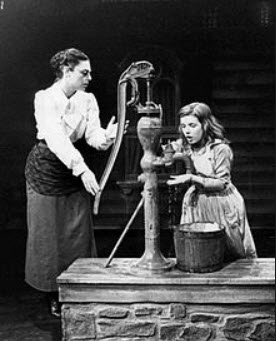 In that time, Annie teaches Helen discipline through persistence and consistency and language through hand signals, a double breakthrough that changes Helen’s life and has a direct effect on the lives of everyone in the family. 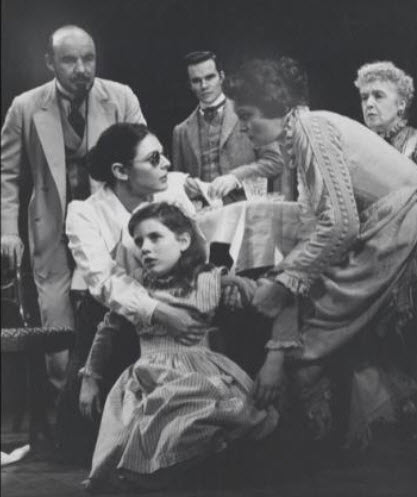 Well, when she speaks slowly the ‘Lords Prayer’ the flood gates opened! It was so moving. This time I wasn’t the only one crying , Ray had started as well!

Then the bloody House Lights came on!  Those fucking House Lights!  I can’t win and just cry in the dark. Fuck it! That’s the cross I have to bare!

Anyway enough tears for the moment. Merry Christmas to you all and, God Bless You. 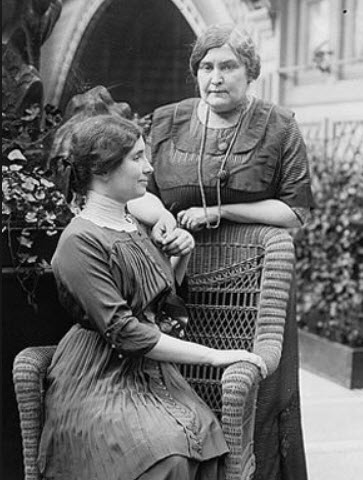 Quite a rare material. Helen Keller, the American author, political activist and lecturer, whom I don’t have to …

Now you know the story, you can hear her talk.